" Put him in the roundhouse till he gets sober,"
So wrote Charles Kingsley in his Water Babies.

These tiny buildings were prevalent in most rural areas in the late Georgian period towards the end
of the 18th century and into the early 19th century although some date further back. They became necessary because of the rise in vagrancy and social unrest in rural areas following the Industrial Revolution which often devastated rural industry and the aftermath of the Napoleonic Wars when men were returning to their localities, many of them disabled and with little prospect of gainful employment, leading to considerable disorder.
This was a time before the advantage of organised police forces and in most communities the law was upheld by the village constable at the instigation of the Lord of the Manor or perhaps the church authorities. This unpaid job was usually given to an upstanding member of the community for a period of one year and he was sometimes assisted by a paid night watchman.
Whilst there would be a pillory and stocks for minor punishment, there was often no proper place for miscreants to be securely detained to sober up or to appear before a Magistrate and a purpose built village lock-up was the answer. Built from local materials, mostly stone and brick but in some cases of wood, these sturdy little buildings were erected in the centre of the village near to the market cross or the church. A stout stone roof and a steel sheet encased in oak planking for the door was the main requirement of most lock-ups. The door would often have some sort of grille for ventilation and communication and sometimes a small barred window high on the outside wall.

﻿
﻿﻿﻿The well preserved roundhouse at Castle Cary in Somerset, built in 1779, is a typical example and the shape of domed roof is said to have been the inspiration for the policeman's helmet. Although often referred to as 'The Roundhouse' they actually came in all shapes, sizes and designs, and were also known as the guard-house, watch-house, blind-house, bone-house, black hole, kitty, cage, jug, lobby, slammer, klink and jail according to the area. Some were polygon in shape, square or oblong with just a single cell inside whilst others had a male and female accommodation. Often built near a river or over a stream for drainage purposes, these lock-ups were usually very tiny, cold and damp, often there was no light and the ventilation was poor which, together with a smelly earth closet or drain in the corner and maybe a stone or wooden bed with straw, and sometimes an iron ring on the wall to further restrain violent offenders, were not intended to be comfortable. In some cases, especially in larger communities, the lock-up was incorporated into an existing building maybe belonging to the local authority or even by adapting an existing building.

In future posts I will be recording  existing lock-ups I have located, some 200 examples, and I will be pleased to hear of any which I may have missed and indeed any other information which can be added.
roy.pledger@virgin.net

I have been able to visit some 60 lock-ups over the years and I have found that there is quite an interest in this subject. I am of course unable to visit them all myself and less so these days. So, to enable me to make a comprehensive record, I have had to rely on the generosity of other people, for photographs and information for which I am eternally grateful. I am especially indebted to Colin Sinnott and Alan Keene from Somerset, Sarah Buttenshaw from Wiltshire, Mike Bardell from Essex, Paul Marston from Cambridgeshire, Ann Williams and many other people who have generously provided me with a continuous supply of photographs. I have done my best to credit all material used and if I have been lacking please let me know.

This index is in alphabetical order by county and then by village or town name.
Asterisk * denotes demolished.

Having mentioned the lock-up or round house at Castle Cary, this is probably a good one to start with. It was the very first lock-up I had seen and I found this iconic lock-up quite fascinating.  It is situated in Bailey Hill, BA7 7AD and it dates to 1779. It has a single cell and appears to have an inner door and a stone toilet.
﻿ This is a photo I took in the 1980's.
It is easy to see why it is claimed that this lock-up inspired the design of the modern police helmet. A plaque on the wall of the lock-up gives some details of its history.

According to the village web site www.castle-cary.co.uk  :

The Overseers' Account Book records the building of a parish blindhouse. The cost of building came from : £10 from the Overseer of the Poor, £2 from funds in the hands of the Churchwardens and a proportional amount from the adjoining parish of Ansford. An entry for 10th June 1779, says that the money was to be used ' to erect a House of Confinement for persons guilty of Felonies and other misdemeanours in the Tything of Castle Carey and Ansford until they are brought to justice, in order to save the expense of a Guard and other expenses generally arising on those occasions.... And it is agreed that the said House be built on the spot where the tree stands on Baily Hill, and to be round and to be seven feet diameter in the clear, to be arched over, and to be Ten Feet High to the Arch, and to have two Iron Gates for conveying fresh air just under the Eve's or Cornish. And that Mr William Clark is appointed to carry out the same into Execution on the best terms he can.'
The total cost was £23.
The 'Iron Gates' were in fact small iron air grilles. The Roundhouse remained in use until towards the end if the 19th century, after which it fell into disrepair but a shilling subscription of May 1894 raised enough money for a thorough restoration.
In 1795, the local Sunday School Committee passed a resolution to use the lock-up : 'That after the schools are commenced, if any children above the age of seven years are found in the streets, etc, breaking the sabbath, they shall be taken up and locked in the Round House during school hours.' Such a strong deterrent probably proved positive as we don't hear of any child being so detained.
Another story in the Congregational Magazine in the early 19th century reported that a tramp shut in the lock-up over Christmas, froze to death

Lock-up. Erected 1779, by Mr. W. M. Clark. Lias stone cut and squared with Doulting stone domed roof. Circular in plan,
about 2.25 metres diameter,on slight plinth; two stepped sloping courses below a bee-hive dome surmounted by ball
finial: boarded door, up 4 stone steps, in plain surround on south side, with vents over door and to rear in first roof
base course. Interior not examined. Built as a 'temporary lock-up' at a cost of £23, and restored in 1894 and 1983,
presented to the parish council in 1922 (plaque on building).
Listing NGR: ST6405932364 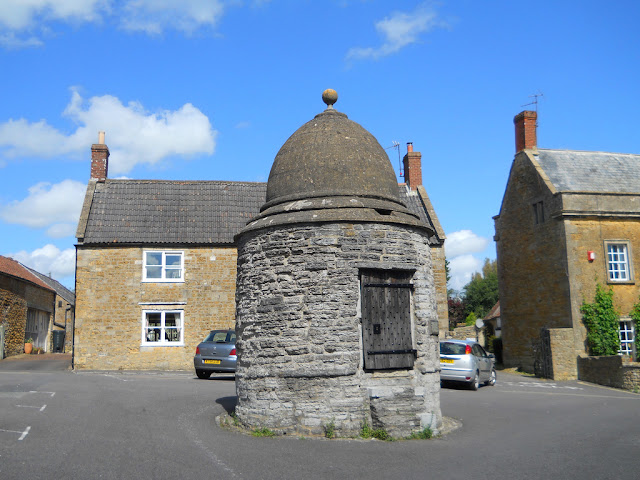 I had intended to continue the posts with some 23 other Somerset lock-ups but unfortunately most of the photographs I had posted were corrupted (this software is rather temperamental) and despite my efforts to correct them I have been obliged to put them into new posts at the very end, so all is not lost.