Many of our villages have totally disappeared over the years, whilst others have been ‘moved’ for a variety of reasons, leaving several oddities : 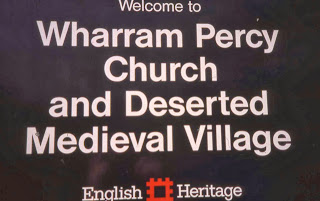 It is believed that there are more than 3,000 deserted medieval villages in England and the sites of many of them have been destroyed by modern development.   Wharram Percy on the Yorkshire Wolds, 6 miles S.E of Malton on the B1248, is one of the best preserved deserted villages in the country.   From a reasonably prosperous village in the 14th century with two manors, this village declined through the next 150 years until it was finally deserted c1500.   The only remaining building of that time is the ruined church.    The site is now in the care of English Heritage. 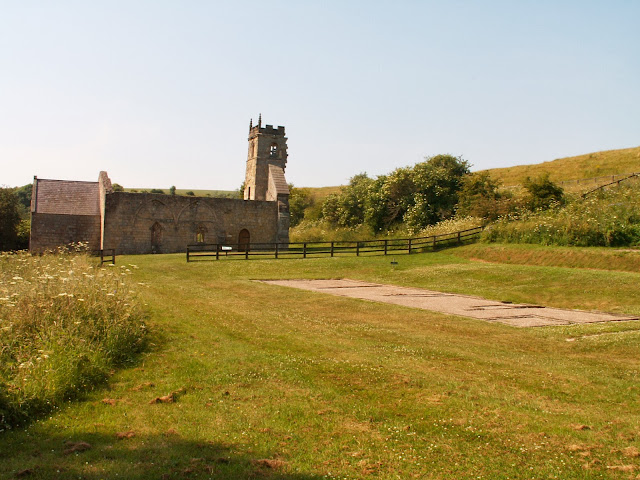 
The tiny village of  Wycoller  is situated in a lovely area of Lancashire known as the Forest of Trawden and close to the West Yorkshire border not far from Haworth of Bronte fame.   There has been a settlement there as far back as 1000BC.     It was essentially an agricultural village until the 18th century when the manufacture of woollen and worsted on handlooms became the prominent industry.   In 1820 the population of Wycoller was 350 but the 35 dwellings soon became deserted as people left to seek more lucrative employment in the mills which had brought prosperity to nearby towns with the coming of the industrial revolution.


Late in the 19th century there was a proposal to flood the valley and Wycoller to create a new reservoir and the village became totally derelict.   Eventually the scheme was abandoned and in 1973, Lancashire County Council purchased the land which they declared a conservation area, with 350 acres of the surrounding countryside being designated a Country Park.


Now much of the village has been restored.  Once again the cottages are inhabited and the community is thriving once again after more than 100 years. 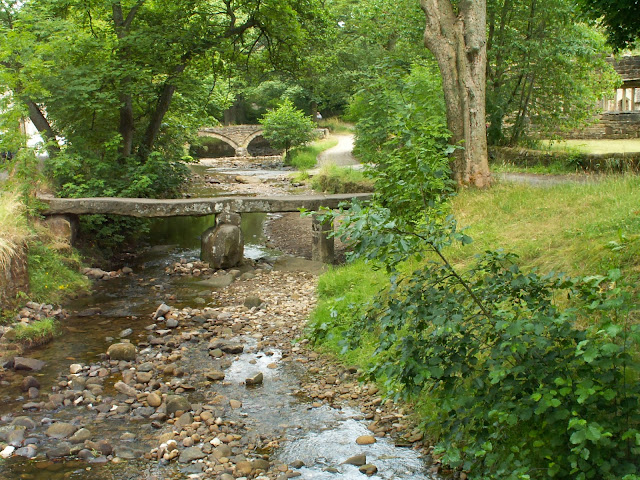 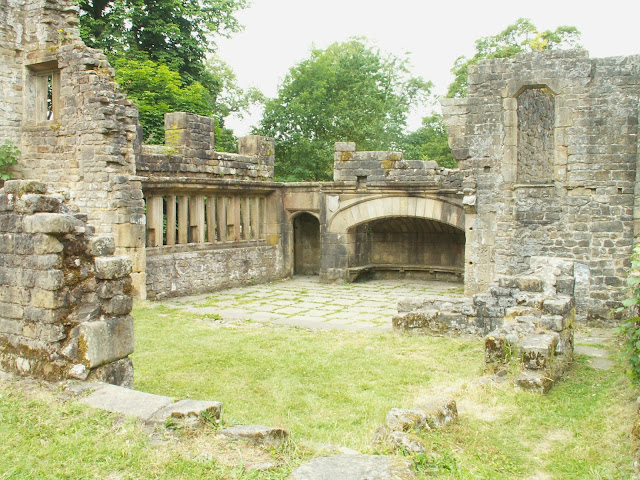 
During the drought of 1995, another abandoned village was laid bare when the waters of Thruscross  Reservoir in the Yorkshire Dales near Harrogate in North Yorkshire, receded.    The valley had been flooded in the 1970’s by the Yorkshire Water Board to supply water to the nearby cities of West Yorkshire.    The village of  West  End  at one end of the valley, was totally engulfed in water and the buildings, including the church, disappeared beneath.   It was said that the church tower could be seen from time to time over the years as the water level lowered.  However in 1995 when the water receded completely from the village, just heaps of stones which had been buildings, were revealed, although two small bridges over a stream running through the village were more or less intact. 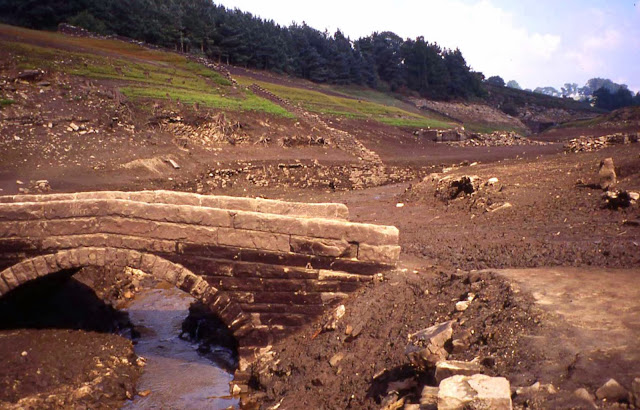 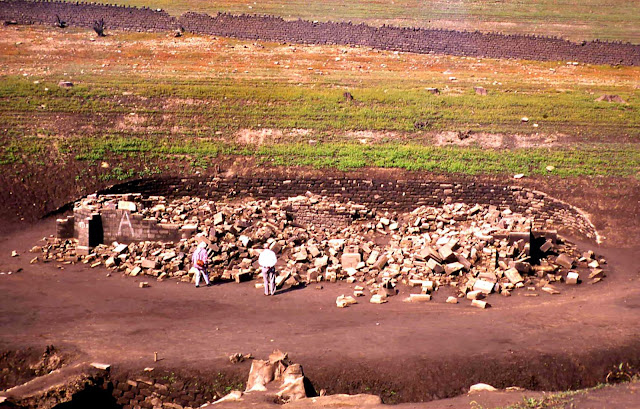 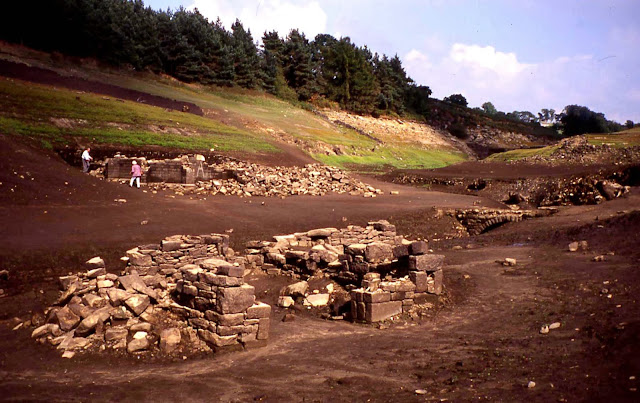 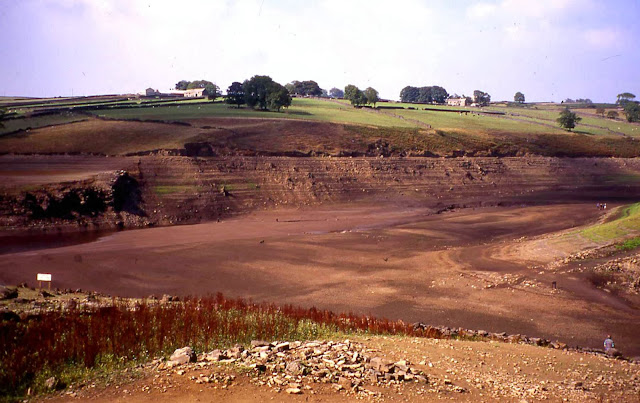 
The lonely tin church at Syre in Sutherland is a stark reminder that throughout the 19th century, landlords evicted Highland tenants from their crofts in order to replace them with marginal smallholdings with extensive sheep farms attached.  Their methods were very harsh often using violence together with the burning of the houses.  Many thousands of these Highlander’s ighlander’s had no choice but to emigh              had no option but to emigrate, leading to the depopulation of the Highlands.   In 1886 following growing civil disobedience, the Napier Commission’s report resulted in the passing of the Crofting Act, giving crofter’s security of tenure, bringing the clearances to an end, but did nothing to restore land already cleared.   Whole villages were cleared in this part of Sutherland leaving a bleak wilderness to the sheep. 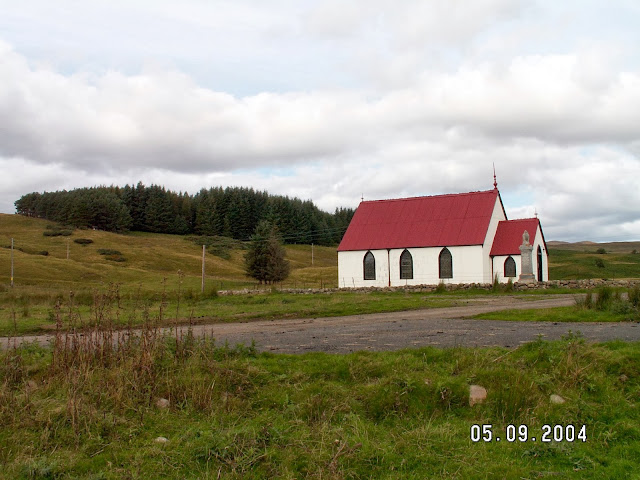 
In the 1770’s, the Earl of Dorchester bought the village of  Milton  Abbas  in Dorset together with the fine abbey which had suffered as a result of the Dissolution.   With the exception of the Abbey church and nearby St Catherine’s chapel, the Earl demolished the lot and built himself a very fine house and park.   However, the Earl did also rebuild the village just one mile away and this ‘model village’ of thatched roofed cottages is still a sight to behold.   The Earl’s house is now a public school and the fine grounds remain.    A very unusual grass staircase still gives access to St Catherine’s chapel, which, together with the Abbey church  is open to the public. 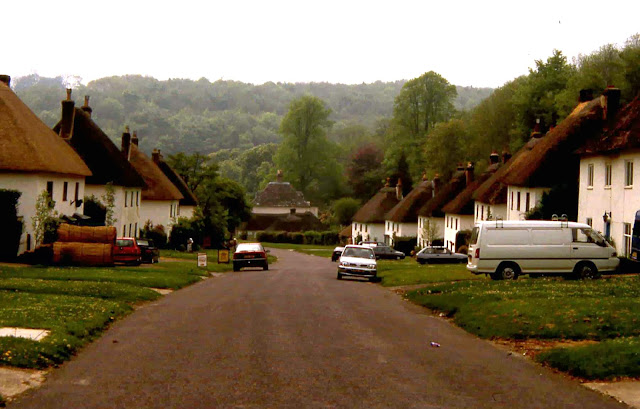 Early in the 19th century, the 6th Duke of Devonshire made various alterations to his home, Chatsworth House in Derbyshire.   At that time he decided that the village of  Edensor,  close to his fine house, was any eyesore and razed it to the ground.   He then had the village rebuilt away from the house, leaving his fine estate uncluttered by houses.


His new ‘model village’ was built just one mile away and no two buildings are the same.  At the entrance to the village is a lodge which looks like a small fort, whilst   in a corner stands a mock Swiss chalet in brown stone.   Other houses have Tudor chimneys, Italian style windows, with a jumble of gables , porches and odd windows. 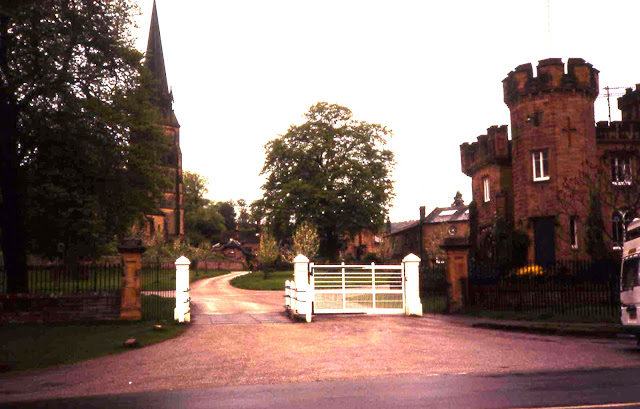 Arkwright  Town  near Chesterfield in Derbyshire was for many years a coal mining village with its close knit community of terraced houses, until mining privatisation in the 1990’s  when the local pit closed down.   To add insult to injury it was subsequently found that methane gas was seeping from the old workings into the houses and the village had to be abandoned.    The village was rescued by a company who wished to opencast mine the area and in 1995 all 200 families were given new homes in a new purpose built village close by. 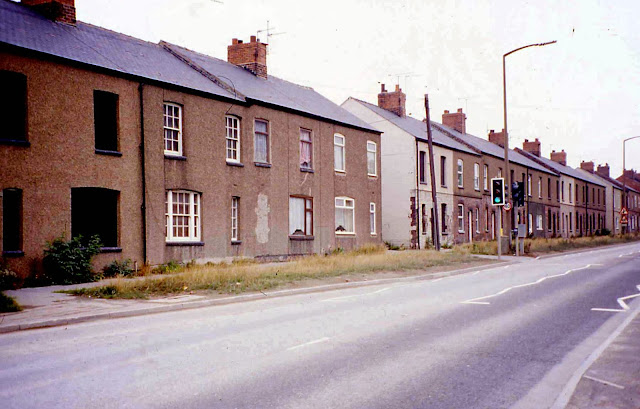 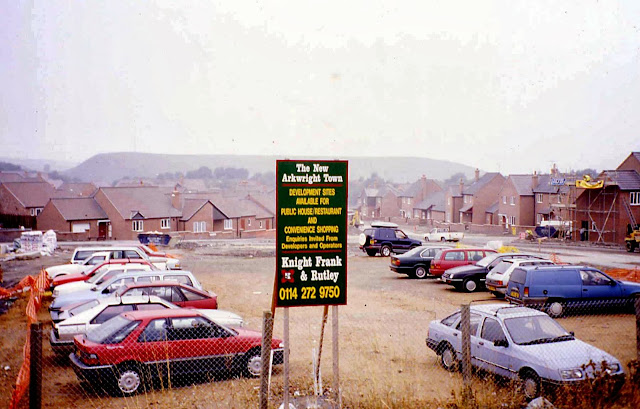 The  town  that  never  was


In the late 1880’s a company was formed to develop the settlement of  Peak  a new village to be situated on the cliff top between Whitby and Scarborough.  The name was changed to Ravenscar  and about 300 people were employed to build roads, drains and so on in readiness for the buildings to be constructed to cater for the influx of people which it was anticipated the development would attract.   Potential purchasers were tempted to attend property auctions by the provision of cheap rail transport from Leeds and Bradford, but they were not a success and the company collapsed.   Today all that remains of the grand plan are some roads now reduced to green tracks between fields,  a few Victorian town houses and a map! 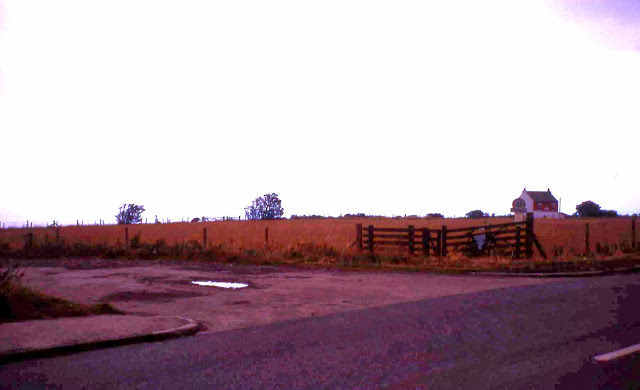 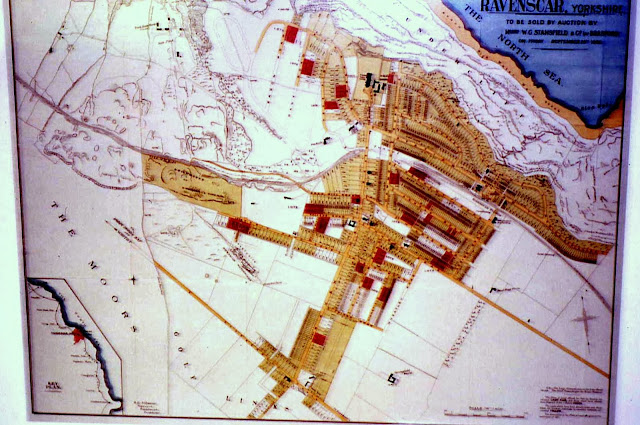 
Many atrocities were committed during the Second World War, non more atrocious than that at  Lidice  in what is now the Czech Republic.   On 10th June 1942, following the assassination of Nazi chief, Reinhard Heydrich,  the village of Lidice was razed to the ground and erased from the map, after all the men had been shot and the women and children removed.


After the war the village was rebuilt nearby and the old site was preserved as a lasting memorial. 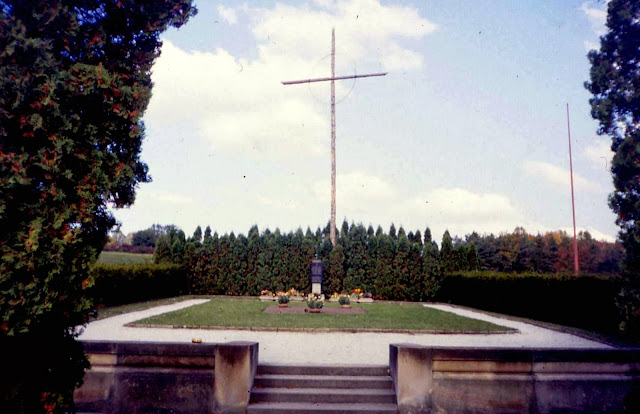 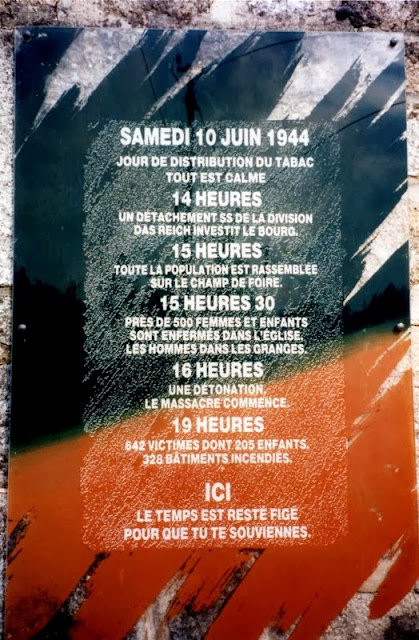 On 8th June 1944 French resistance fighters blew up a railway bridge some 10 kilometres from the little village of  Oradour-sur-Glane  in France, in order to delay German troop movement which was converging on the Normandy front.   Two days later at 2.0pm troops belonging to S.S Der Fuhrer Regiment surrounded Oradour and ordered all the villagers to congregate outside.   The women and children were put into the church, whilst all the men were shot.    Not satisfied with this barbarity, the women and children were also shot, the youngest being an 8 days old child.   A total of 642 people were killed.   The village was then set on fire.


After the war a new village was built nearby and the old site was preserved as a lasting memorial. 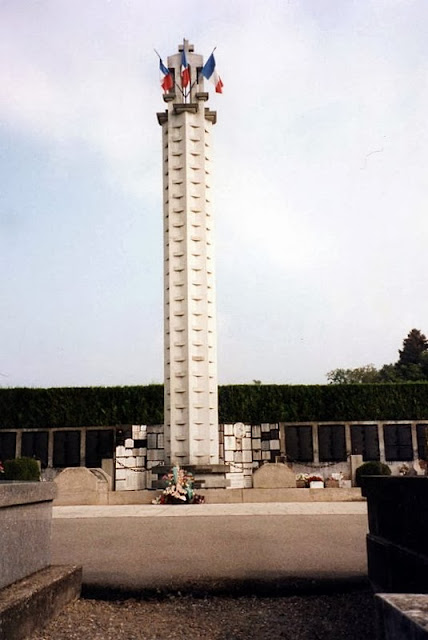 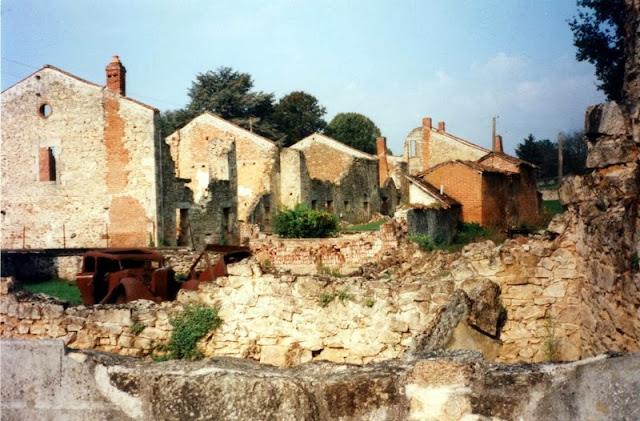 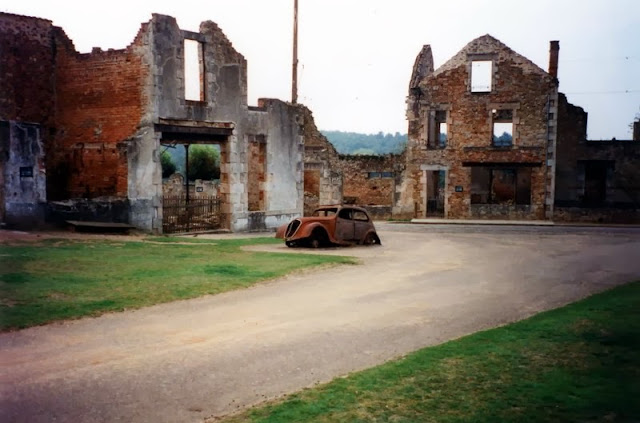 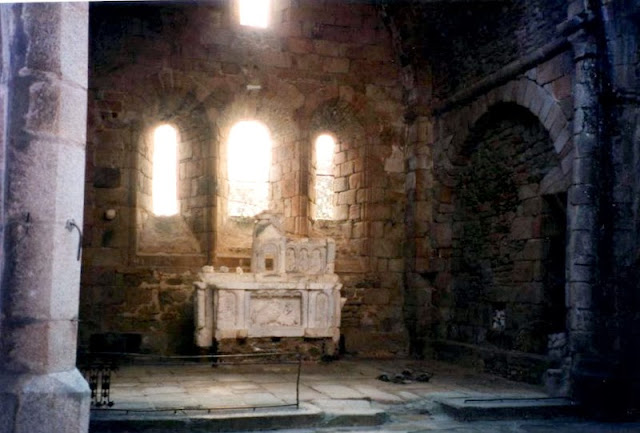